Imagine yourself living in a cozy log cabin tucked away somewhere in the backwoods. It’s an idyllic flight of fancy, but once it becomes lodged in your mind it cannot be extracted. It becomes a part of you, and whether it grows or it festers, it’s there to stay. And you know if you’re ever to have any peace, you’ll just have to make it come true.

There are lots of ways to build a log house or cabin, but they all boil down to two choices: you can assemble a kit made from logs milled to identical specs, or you can craft your own cabin from a unique selection of individual trees. In either case the result is a cabin made from logs. But that’s where the similarities end.

Most people go with kits, and that’s understandable. A log cabin kit will go together quickly, each log locking into place like a piece in a well-made puzzle. There are no concerns of felling, transporting, cribbing, peeling, or notching a multitude of dissimilar logs. That’s all been done for you, and you can get right down to the business of putting your house together.

But for some, the journey—and I’ll tell you right now, it will be an epic one—becomes a goal in itself; an adventure waiting to unfold. Here’s a taste of what you’re in for…

Ideally, you’ll have an acreage so well endowed with tall, straight trees that you’ll have all your cabin logs cut and cribbed by the time you finish clearing your building site. But probably not. LaVonne and I have enough fir trees on our property to build a log town, but they’re all growing on an inaccessible hillside. So we bought a semi-truck load of dead trees from a (somewhat) local logger, who blew out his rig’s differential on our unforgiving road and had to dump our logs on a neighbor’s property a mile from our house.

If you do end up buying logs, buy them directly from the logger. Just don’t try to find one in the yellow pages or on the Internet; loggers don’t usually advertise. Instead, find a log-home builder in your area and ask where they get their logs. Then arrange to meet the logger at his yard, where you can pick through his selection of logs to get exactly what you want.

What do you want? Long, straight trees with very little taper and a minimal amount of twist. The farther north you plan to build, the bigger the logs you’ll need. In Colorado, we used logs that averaged 10 to 12 inches on the butt end, tapering to 8 inches or sometimes even less. Our house is warmer in winter and cooler in summer than anyplace we’ve ever lived. But if you’re building in Minnesota or Wisconsin, you’ll definitely want bigger logs.

You can build with either green trees or dry ones. Because our log handling equipment consisted of a ’60s-vintage farm tractor and a medium-duty winch, we opted for dry trees, simply because they would be lighter and easier to move around. We also appreciated the fact that our finished cabin settled 2 inches instead of 6 inches. But if you’ve got the means to handle heavy logs and are prepared to deal with the extra settling, then use whatever suits you.

If you have unlimited access to a boom truck, you’ve got it made; otherwise you’ll need to do some planning. We used our old tractor to lift the logs. Once the walls got too high for the tractor’s hydraulics, we’d elevate one log end onto the wall and pull it up with a winch mounted on the boom of a gin pole, sticking up through a hole in the floor from the basement below. The winch was slow and the tractor didn’t have much in the way of brakes, but we made due.

You could also try a skyline, which is a strong cable stretched between two trees (or two well-guyed towers) on which rides a winch attached to a snatch block. With the addition of two ropes—one for pulling, one for braking—even heavy logs can be moved onto an ever-growing wall with relative ease. (As this is a rigging operation, you may want to consult a rigger.)

Another method is use ropes to roll logs up an incline made from logs running obliquely from the wall to the ground. But this is a tedious setup with serious potential for mishaps and I would only use it as a last resort.

However you raise your logs, handle them with respect. Logs are heavy and unforgiving, and you don’t want to be in the way of a thousand-pounder that’s just broken loose of its tethers. 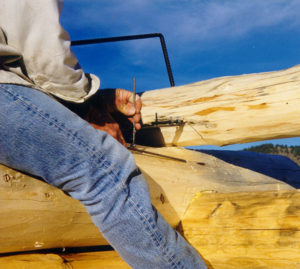 Choosing which log goes where is often a tricky business. Whenever possible, use your bigger logs at the bottom of the wall, your smaller logs toward the top. Always mate butt ends with tips, avoiding too-thick on too-narrow. That being said, your primary concern is to end up with your very last course of logs equal in height from end to end, and side to side, and sometimes you have to break the rules to make that happen.

This means you’ll have to think ahead—a decision that fixes a problem for one course of logs might only make the situation worse for the next course. Sometimes you just might have to leave a bigger gap than you wanted. If that’s what it takes, do it; in the end, you won’t even notice. Chinking is the great equalizer.

Once a wall log is notched and set, drive in spikes or rebar to hold it in place. I used 12-inch spikes about every 4 feet in pre-drilled, countersunk holes. Other builders just spike the corners and run full-length rebar beside windows and doors. However you go about it, you’ll need to know where your doors and windows will be before you build the walls, even though you probably won’t cut out the openings until later. Think chainsaw, then think spike. You get the picture. We used a felt-tipped marker to make heavy lines on the subfloor, indicating the placement of the doors and windows. It worked, mostly. 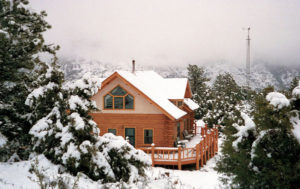 Not Easy, but Rewarding

Before I met LaVonne, I’d already built two log cabins so I knew what was involved. When we decided to build one for ourselves we watched a video detailing the process. Afterwards she exclaimed, “It’s impossible!” As any man would do in my position, I lied through my teeth. I told her the video producers had gone out of their way to make it look difficult.

Later, when we were using a high-lift jack and a pair of homemade trailers to haul our misplaced logs one at a time up our steep, winding road, she remarked how much work we were putting in each log. I smiled and said, “This is nothing. By the time we’re through with these logs, this part of the operation will seem insignificant.” The truth was out.

Just the same, we set the first wall log on Labor Day and had the roof on before Thanksgiving.

Log building ain’t easy, but it’s doable. And rewarding, in so many ways.

Read more about handcrafting log homes, and living off the grid in Rex’s book: