Origins of Fire – Stories from Around the World

Origins of Fire – Stories from Around the World

Peak into fire’s ancient myths and stories and you’ll discover devious tricksters and animals with magical powers. Fascinating stuff for kids learning about fire safety from Einar Jensen, the author of Ancient Fire, Modern Fire and Origins of Fire books. In this new blog series, we’ll share a few of the ancient myths that Einar has collected. They are fun to read, no matter what age you are. Enjoy!

From the Choctaw in the Southeastern United States

The Choctaw People say that when the People first came up out of the ground, People were encased in cocoons, their eyes closed, their limbs folded tightly to their bodies.

And this was true of all People, the Bird People, the Animal People, the Insect People, and the Human People. The Great Spirit took pity on them and sent down someone to unfold their limbs, dry them off, and open their eyes.

But the opened eyes saw nothing, because the world was dark, no sun, no moon, not even any stars. All the People moved around by touch, and if they found something that didn’t eat them first, they ate it raw, for they had no fire to cook it.

This caused a stir of wonder, “What could fire be?” There was a general discussion, and it was decided that if, as rumor had it, fire was warm and gave light, they should have it too. Another voice said, “But the people of the East are too greedy to share with us.” So it was decided that the Bird and Animal People should steal what they needed, the fire!

But, who should have the honor? Grandmother Spider volunteered, “I can do it! Let me try!” But at the same time, Opossum began to speak. “I, Opossum, am a great chief of the animals. I will go to the East and since I am a great hunter, I will take the fire and hide it in the bushy hair on my tail.” It was well know that Opossum had the furriest tail of all the animals, so he was selected.

When Opossum came to the East, he soon found the beautiful, red fire, jealously guarded by the people of the East. But Opossum got closer and closer until he picked up a small piece of burning wood, and stuck it in the hair of his tail, which promptly began to smoke, then flame. The people of the East said, “Look, that Opossum has stolen our fire!”

They took it and put it back where it came from and drove Opossum away. Poor Opossum! Every bit of hair had burned from his tail, and to this day, opossums have no hair at all on their tails.

Once again, the powwow had to find a volunteer chief.

Grandmother Spider again said, “Let me go! I can do it!” But this time a bird was elected, Buzzard. Buzzard was very proud. “I can succeed where Opossum has failed. I will fly to the East on my great wings, then hide the stolen fire in the beautiful long feathers on my head.”

The birds and animals still did not understand the nature of fire.

So Buzzard flew to the East on his powerful wings, swooped past those defending the fire, picked up a small piece of burning ember, and hid it in his head feathers. Buzzard’s head began to smoke and flame even faster! The people of the East said, “Look! Buzzard has stolen the fire!” And they took it and put it back where it came from.

The powwow now sent Crow to look the situation over, for Crow was very clever. Crow at that time was pure white, and had the sweetest singing voice of all the birds. But he took so long standing over the fire, trying to find the perfect piece to steal that his white feathers were smoked black. And he breathed so much smoke that when he tried to sing, out came a harsh, “Caw! Caw!”

The Council said, “Opossum has failed. Buzzard and Crow have failed. Who shall we send?”

Tiny Grandmother Spider shouted with all her might, “LET ME TRY IT, PLEASE!” Though the council members thought Grandmother Spider had little chance of success, it was agreed that she should have her turn. Grandmother Spider looked then like she looks now, she had a small torso suspended by two sets of legs that turned the other way. She walked on all of her wonderful legs toward a stream where she had found clay.

With those legs, she made a tiny clay container and a lid that fit perfectly with a tiny notch for air in the corner of the lid. Then she put the container on her back, spun a web all the way to the East, and walked tiptoe until she came to the fire. She was so small, the people from the East took no notice. She took a tiny piece of fire, put it in the container, and covered it with the lid. Then she walked back on tiptoe along the web until she came to the People. Since they couldn’t see any fire, they said, “Grandmother Spider has failed.”

She lifted the pot from her back, and the lid from the pot, and the fire flamed up into its friend, the air. All the Birds and Animal People began to decide who would get this wonderful warmth. Bear said, “I’ll take it!” but then he burned his paws on it and decided fire was not for animals, for look what happened to Opossum!

The Birds wanted no part of it, as Buzzard and Crow were still nursing their wounds. The insects thought it was pretty, but they, too, stayed far away from the fire.

Then a small voice said, “We will take it, if Grandmother Spider will help.” The timid humans, whom none of the animals or birds thought much of, were volunteering!

So Grandmother Spider taught the Human People how to feed the fire sticks and wood to keep it from dying, how to keep the fire safe in a circle of stone so it couldn’t escape and hurt them or their homes. While she was at it, she taught the humans about pottery made of clay and fire, and about weaving and spinning, at which Grandmother Spider was an expert.

The Choctaw remember. They made a beautiful design to decorate their homes, a picture of Grandmother Spider, two sets of legs up, two down, with a fire symbol on her back. This is so their children never forget to honor Grandmother Spider, Fire Bringer. 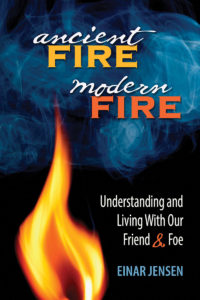 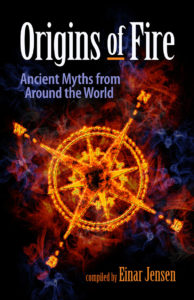